This is the ASCII-version of RunToTheStairs. Try the new graphical version (requires WebGL 2.0)!

Alternative controls if you don't have a numpad

If you prefer the Vi keys you can press [v] to switch to the Vi-key-mode. In this mode the Vi keys are used for movement. Hitting [v] another time brings you back to WASD-QEZC-mode.

See how I manage to overtake Runner H by moving diagonal:

This was very close but it worked since I could cut the corner! :-)

Overtaking by taking another route

Here I am overtaking runner H by taking another route so Runner H does not block my way:

Overtaking by igniting a nitro

Here I doubled my speed by igniting  a nitro in order to overtake runner E. The @-sign representing the player is displayed in red as long as the player has double speed.

Overtaking by digging a shortcut using a drill {new in v0.2}

Here I am overtaking runner G by digging a shortcut using a drill. The @-sign representing the player is displayed in yellow as long as the player is in digging mode.

How to have fun in your first games

How to get a high score

The high-score-table is listed on the web-page of the graphical version of this game.

Please post your score and dungeon level in the comments below and you will get listed here. If you post your score here, I will definitely play your game and give some feedback. If you provide a video, I will link to it here and highlight some special moment in the "Comments" column.

If you do not have an itch.io-account and do not want to create one, just post your score in the comments-section of one of the linked videos. I will also check there every now and than and will update this table accordingly.

If your score would be the new top score of this table it would be nice if you could also provide a screenshot of your game-over-screen. You could either post it or link it in your comment or send it per email to gerhard[dot]wonner[at]web.de. However if your score does not beat the current top score it is not necessary to provide a screenshot. Just posting the score is enough in this case.

I have to apologize that the following text will have an accumulation of the word "amazing" in it. The reason for this is, that what happened yesterday (25.03.2019) was just absolutely ... AMAZING! So I want to share it with you! :-)

As I checked the most popular web games on itch.io I found my game RunToTheStairs on first place out of 55,563: 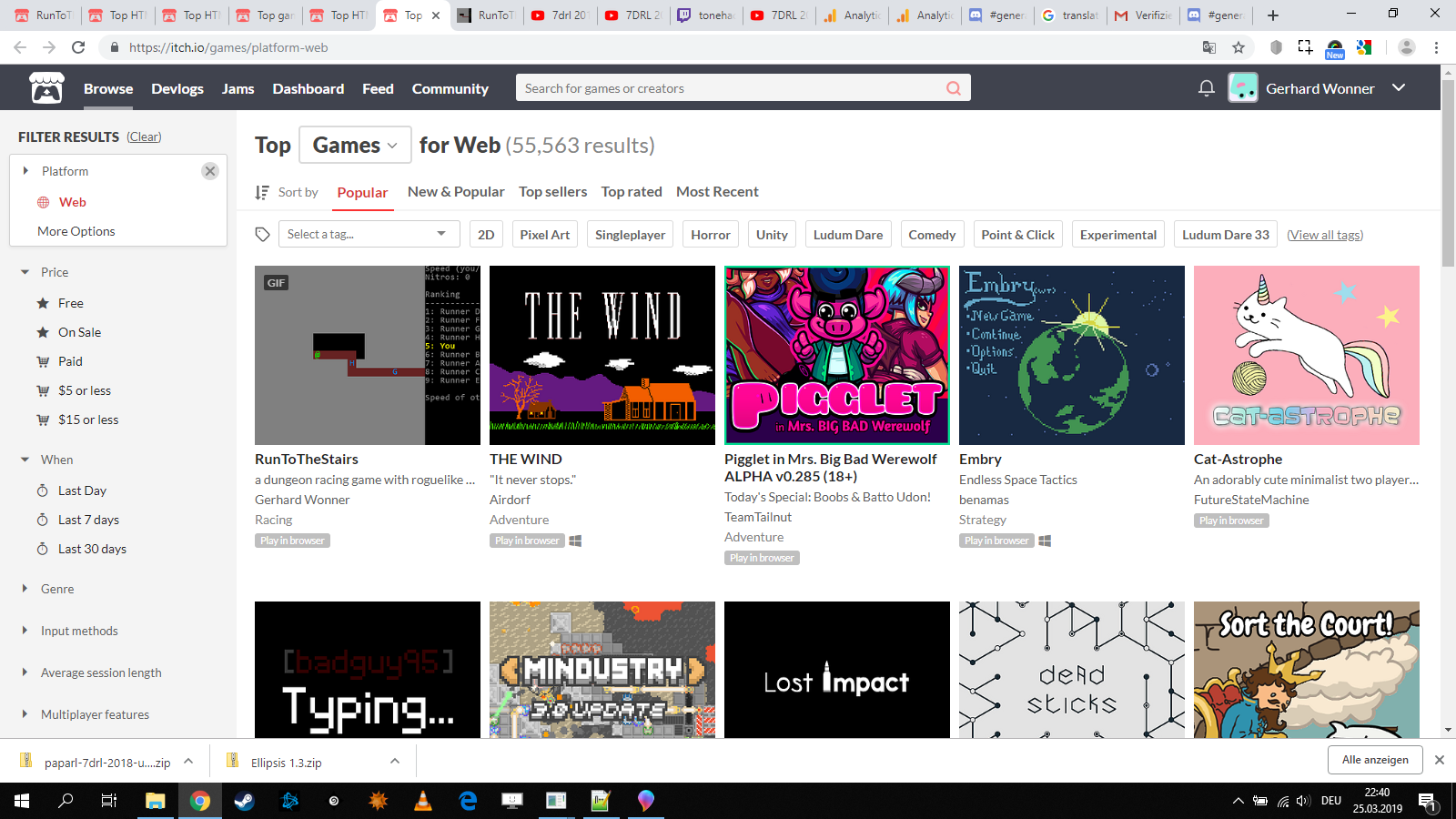 And as I checked the most popular games without any filter it was listed 7th out of 157,274: 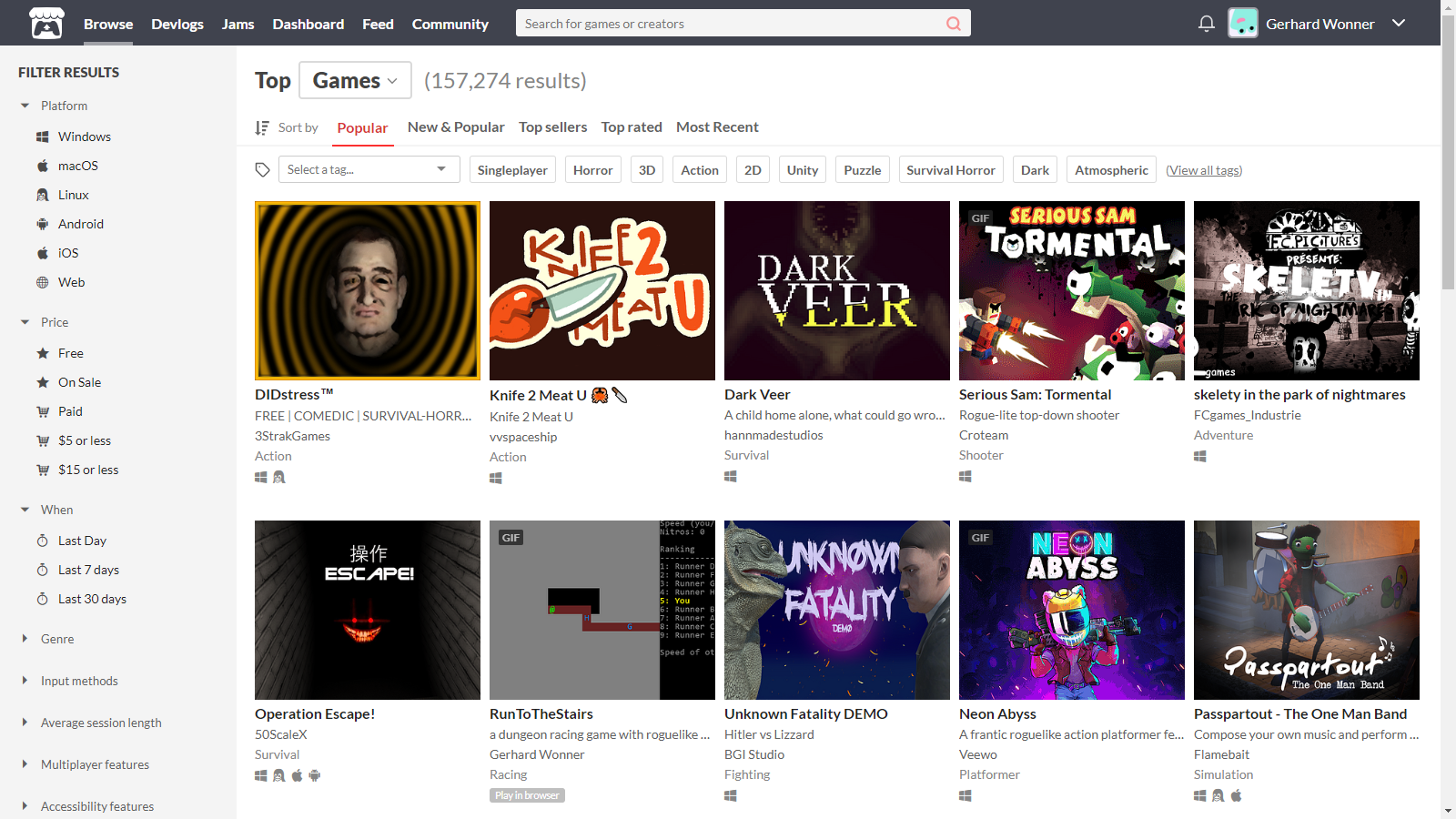 I just could not believe this and thought that my browser was fooling me and somehow biased my game to the top. So I asked some nice guys from Discord to check it and they just saw the same screens as I did. Isn't this amazing? I don't know exactly how this popularity ranking works. The best source I found is here. I just want to thank Rogueliker since he boosted the popularity of my game with his nice video about it. Just see the huge step the click-rate did after he posted it:

I also like to share with you some geographical data I got from Google Analytics about the countries the users came from (the data also comes from 25.03.2019): 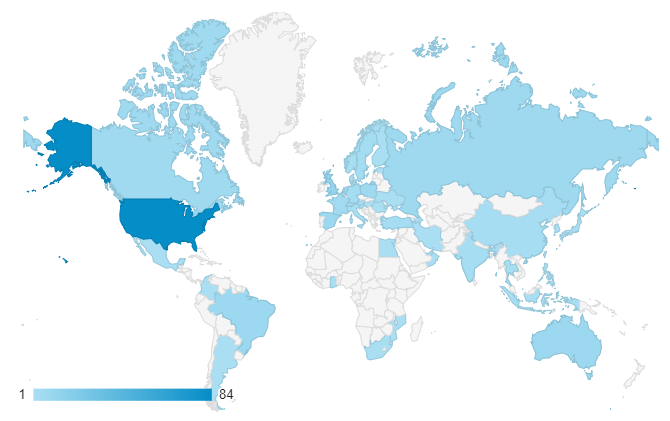 Someone on the Maldives probably played my game. I just can't believe it. Go out and enjoy the sun at the beach... and then come back and play RunToTheStairs again! ;-)

Since most of the players came from the USA I will give a little more detail here: 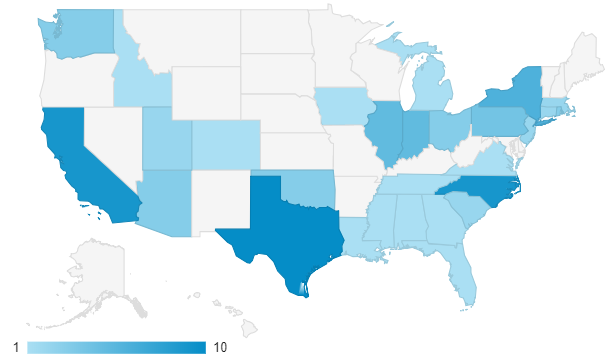 Hey why is nobody in Alaska playing my game? Somebody has to tell them to do so! ;-)

How clicks evolved since then 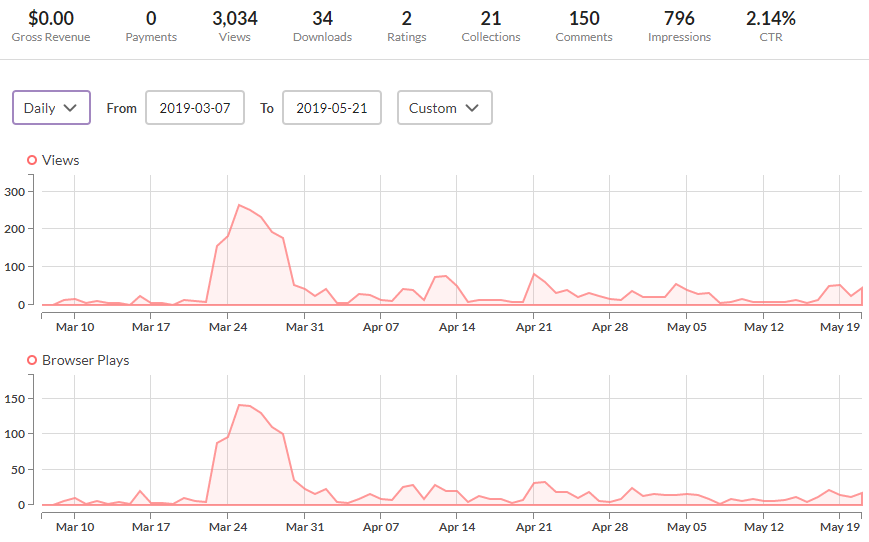 The visitors came from 84 different countries!

What the judges think about RunToTheStairs

Following you find the 3 official reviews of the 3 different jam-judges who reviewed my game for the 7DRL Challenge 2019:

I wanna thank the judges for the detailed and constructive feedback!

The reviews of all the exciting games in the challenge can found on http://roguetemple.com/7drl/2019/. I want to congratulate dungeonyak for winning the challenge with his imaginative game Inner Life - a well deserved victory!

I also wanna share with you this very nice comment by owlmoth about which I am very happy:

"I've been playing a lot the last few days, this is my best score so far. It's a very creative take on the roguelike mechanic to not be combat-based, but stays true to the spirit by maintaining all the high points of the genre like resource management, unlimited replayability, and "weighty" risk vs. reward choices - trying to decide if it's worth detouring for a power-up feels meaningful in the context of the game. The gameplay is also a lot snappier than you'd expect from a turn-based game, another departure from the norm that just works really well here. This is what indie games are all about for me; taking some risks, making some less-common design choices, leaving the beaten path and finding a fun little mechanic off in the weeds somewhere.  If I could add anything, it'd only be an 'instant replay' feature; to be able to go back after the end of a level and rewatch the race in 'real' time. Thanks for sharing this with us!"

Plans for the future

I consider to implement the following things:

144.  Game is very fun!  Given your current leaderboard, may come back for a second playthrough and see if I can get top 10 ;)   Boosts are a big deal, of course, but the exponential enemy speed growth means that past level 14ish it doesn't much matter if your speed gets another ~2% improvement-- nitros (and maybe drills, haven't used those effectively yet) are the only things keeping you alive.  Also for the last several levels of a run, when you're barely making it each time, coins are where your points come from.  And when you know you're dead, it's time to fetch coins till the ref calls the game on account of everyone else finishing.

Pretty happy to make it this high on the leaderboard on my first try, though D:  I could probably have gotten another 1st place with better early play in terms of boost collection and mid-game nitro usage.

Thank you for playing my game and sharing your score. I included you into the high-score-table. Congratulations, you are currently on rank 16. 144 points are a very good score considering that it was your first try. I am very curious, how high you can climb on the leaderboards!
Have you already tried the graphical version of RunToTheStairs? It looks much better, but requires a modern browser which is supporting WebGL 2.0.

I like your analysis of my game. In fact the game has several phases where different items are of different value and different tactics have to be applied. But there are no hard borders between these phases. Getting a sense for these phases is crucial for getting a high score. Also you have to make a tradeoff between using nitros for finishing in good positions in early levels vs. using them for pure survival in later levels. 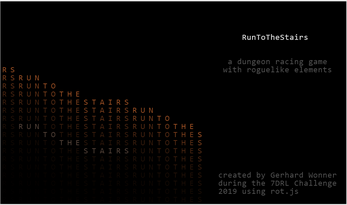 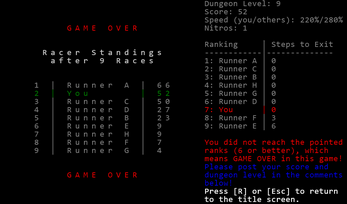